This post was written by our creative partner Lisa Heledd Jones, from Storyworks UK. 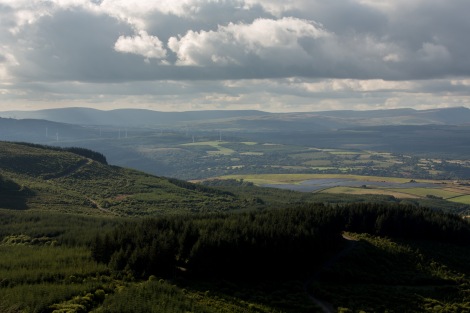 Descending into Treherbert from the Rhigos road has to be one of the best entrances to any village ever. This was my first visit since August – this time there was snow on the tops and I wasn’t going into the brilliantly chaotic embrace of the Story Studio at the old library, but was going into people’s homes all over the village.

During the Studio fortnight we had recorded around fifty people telling us about their lives and their relationships with energy. From that collection we chose six interviews to be edited down into digital stories. Digital Stories are short films made up of a person’s personal story and photographs.

I was the one who listened to the interviews, some as long as an hour, and then put together an audio story of around three minutes for each person. It can be a tricky thing to do, as inevitably what people are saying is so interesting, it’s hard to imagine what should go and what should stay…at first, but as soon as I’ve listened a few times I can hear the heart of the story and it all fits into place.

So this trip was about playing to people their stories to see if they were happy and to work with them to select photographs to sit alongside their voice. Over two very cold and beautifully blue-sky days I went into five homes, had eight cups of tea, two cup of coffee, six custard creams, a tunnocks teacake and shared each of the stories with the people involved.

My first stop was Christine – she made me a cracking ham and cheese sandwich as I went through her pile of albums and learned more about her life and her love of Treherbert and her family – she spends one night a week visiting her sister across the road – she thinks it’s so important to have family routines now they don’t have their parents around to rely on as a central force. She showed me pictures of her granddaughters on the walls of the living room and on her mobile phone and we chose her favourites to keep in the digital story. She ate her sandwich as she listened to her voice and laughed and nodded along to the truths she’d forgotten she’d shared with me months earlier. She was happy and I was relieved and we had all the pictures we could need to make the story as lovely as it deserves to be.

And so it went on up and down the streets of Treherbert playing stories of religion, recyling and rescuing. On my way to one house I stopped to let a man on a horse pass me by, on the way to another I noticed the best takeway name of all time… 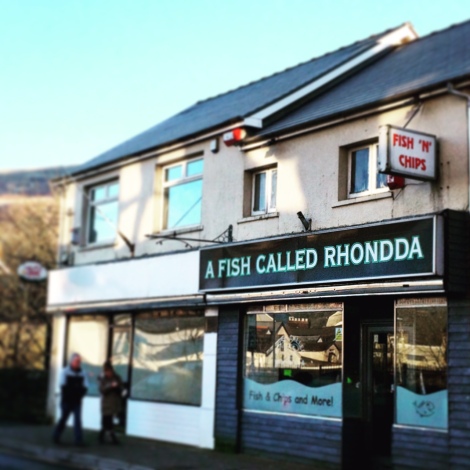 I went to Carpanini’s for a milky coffee and to admire the décor – unchanged (in the best possible way) for decades.

My last stop was to Beryl’s home – she has the loveliest view of the village from her house and the last beams of evening sun were scattered across her patio and into her garden room where we were sat as I dropped my cinnamon biscuit into my cup of tea which splashed over my knee and luckily not onto the nice sofa. Beryl was as gracious about my clumsiness as she is articulate in her story about knowing “the true cost of energy”. As we sat, a friend came to the door – a friend since Beryl’s school days, she sat with us and listened to her story as Beryl brought out a collection of pictures of her life in this community for me to photograph – of her daughter as a teenager at the front door; of a holiday in Butlins with a best friend; of her husband just weeks before he died in the Cambrian disaster. Beryl’s friend took off the headphones and said “You’ve said so much in such a short amount of time – moments from your past and also what you want for the future of this community – this is perfect”.

I left Treherbert with hundreds of photographs to add to the stories along with five cinnamon biscuits wrapped in clingfilm for my journey over the Rhigos and back to North Wales. If I hadn’t insisted, Beryl would have given me the whole packet. The generosity of people always amazes me – whether shown through sandwiches, biscuits or stories shared.